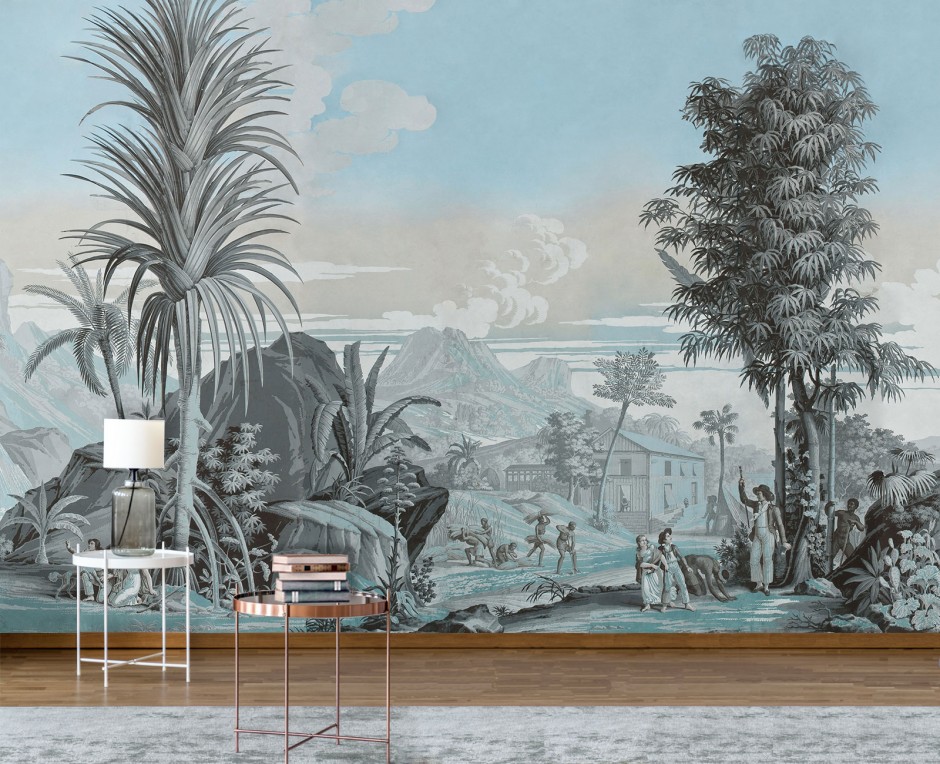 Edited in 1824, this panoramic wallpaper has been made by the Manufacture Dufour and Leroy. The complete artwork is made of 30 strips in grisaille brightened up with different blues, and printed by means of 847 engraved wood-blocks, 224 of which for the figures. Measuring nearly 16 meters, this panoramic wallpaper is one of the longest from the collections of the Musée des Arts Décoratifs de Paris.
It is inspired by a very successful novel by Bernardin de Saint-Pierre, published in 1788. Romantic narrative of love between two children growing harmoniously in the idealistic nature of l’île de France (now Mauritius), it conveys nostalgia of both childhood and lost paradise, while criticizing the damaging effects of civilization.

Revitalizing this gorgeous panoramic wallpaper by a digital restoration was a patient and meticulous fifty-hour work from our workgroup.

Created by Joseph Dufour, the so-named manufacture is, along with Zuber and Cie, one of the most exceptional  of the 19th century regarding the creation of wallpapers, and especially  panoramic murals. Ambitious, talented, humanist, and heavily influenced by the French Revolution ideals, Joseph Dufour set up first in Mâcon, and  then in Paris. At his beginnings, he kept in tune with the style and taste of time, reproducing drapery patterns on paper. Then, he progressively turned towards literary and exotic themes which he made the most with the creation of mural panoramics.

Exhibited in Paris in 1806, his first panoramic mural, “Les Sauvages de la Mer Pacifique”,  enjoyed  great success, and Joseph Dufour was then considered the most revolutionary creator of the time in the art of decoration. Therefore, associated to his name, his patterns became famous all over the world, especially in Europe and in The United States.

This scenic wallpaper is evoked by Honoré de BALZAC in a novel titled : Les Paysans. Describing the “Café de la Paix” in La Ville-aux-Fayes, he mentions that the interior had been hung with a wallpaper showing the main episodes of PAUL et VIRGINIE. He even specifies that “ You could see Negroes harvesting café”. In general, wallpapers and scenic wallpapers are mentioned and described a hundred times or so throughout La Comédie Humaine, which is a sign that they were widespread at that time.

Numerous species of trees can be identified on this mural : sugar canes, palm trees with fan-shaped leaves, dragon trees… As most of panoramic wallpapers, "Paul and Virginie" shows the 19th century taste for botany and horticulture, as well as the aspiration to the wild nature values  praised by the French writer Jean-Jacques Rousseau (1712-1778).

Otherwise, you can notice that unpleasant episodes or representations have been avoided. For example, Virginie can be seen fighting against the waves, not dead on the beach ; characters are chatting, carrying light bundles, not working hard. On another hand, you can notice Paul praying on Virginie’s grave : an exceptional religious representation on a panoramic wallpaper.