Edited in 1818, this panoramic wallpaper has been made by the Maufacture Dufour. It is a free interpretation from a book by J-F Marmontel (1723 – 1799) : Les Incas, ou la destruction de l’empire du Pérou (1776). Relating the conquest of Peru by Pizzaro in 1532, this novel emphasizes the Indians’ tolerance and innocence, opposite the Spanish conquistadores’ cruelty. Yet, the mural overlooks the shady side of the conquest and shows a peaceful portrayal of the two civilizations.

This panoramic wallpaper has been garnered from the collections of the Musée des Arts Décoratifs de Paris. There is another copy in the Victoria and Albert’s Museum, in London.

Created by Joseph Dufour, the so-named manufacture is, along with Zuber and Cie, one of the most exceptional of the 19th century regarding the creation of wallpapers, and especially panoramic wallpapers. Ambitious, talented, humanist, and heavily influenced by the French Revolution ideals, Joseph Dufour set up first in Mâcon, and then in Paris. At his beginnings, he kept in tune with the style and taste of time, reproducing drapery patterns on paper. Then, he progressively turned towards literary and exotic themes which he made the most with the creation of mural panoramics.

Exhibited in Paris in 1806, his first panoramic wallpaper, “Les Sauvages de la Mer Pacifique”, enjoyed great success, and Joseph Dufour was then considered the most revolutionary creator of the time in the art of decoration. Therefore, associated to his name, his patterns became famous all over the world, especially in Europe and in The United States.

The panoramic wallpaper « Les Incas » decorates the big lounge of “La Ville Bague”, a wealthy shipowner’s residence : “La Malouinière”, not far from Saint-Malo. Hiacynthe de Penfentenio, Marquess de Cheffontaines and his wife Julie-Marie-Rose Eon, had it hanged, when they came back from exile. Took down in 1972, the mural was sold in 1976 in a very bad condition. Restored afterwards by the Beaux-Arts, it was hanged back in its original place at “La Ville Bague”. It is henceforth listed as an historical monument.

At several places, on this mural, a baby can be seen, here in a hammock, there hanged on his mother’s back… This baby’s presence gives a pleasant and benevolent atmosphere to the scenery. Pleasant, but strange, since this new-born is depicted like a mature creature with grey hair, marked face and bulging muscles.

In general, due to engraved wood-blocks, which are less precise than brushes, the figures’features  on murals are relatively undefined. But panoramic wallpapers were not made to be looked at closely, their purpose was to create  a general impression. 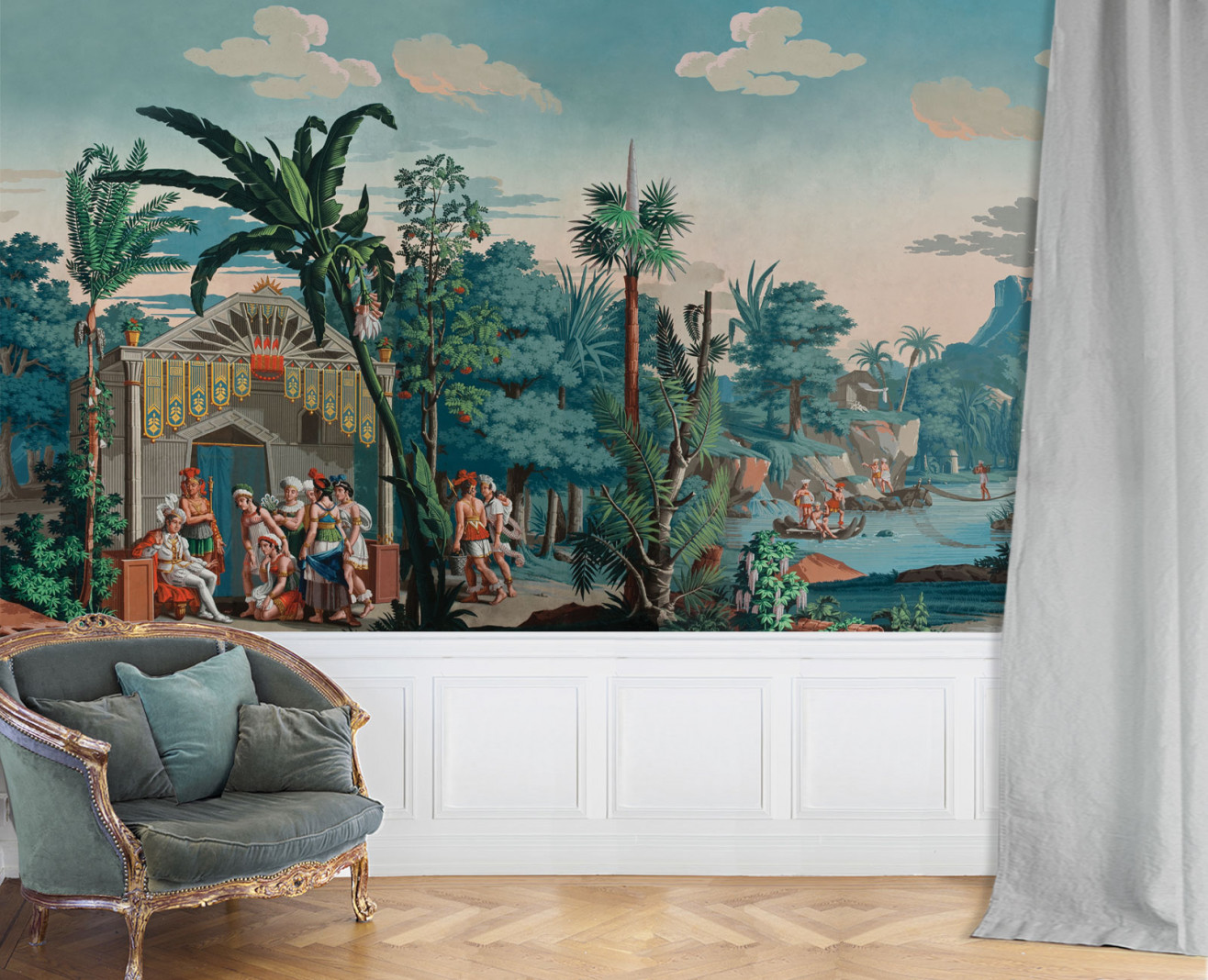 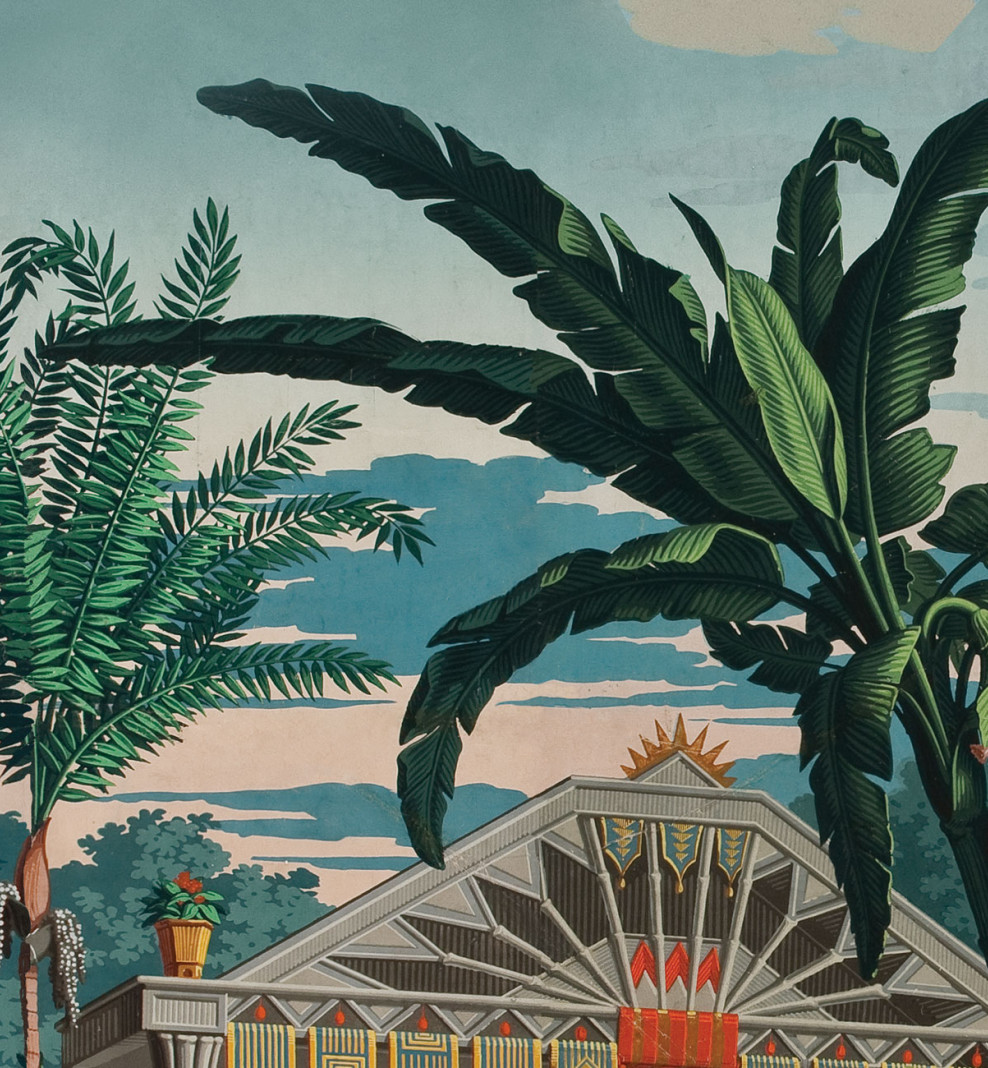 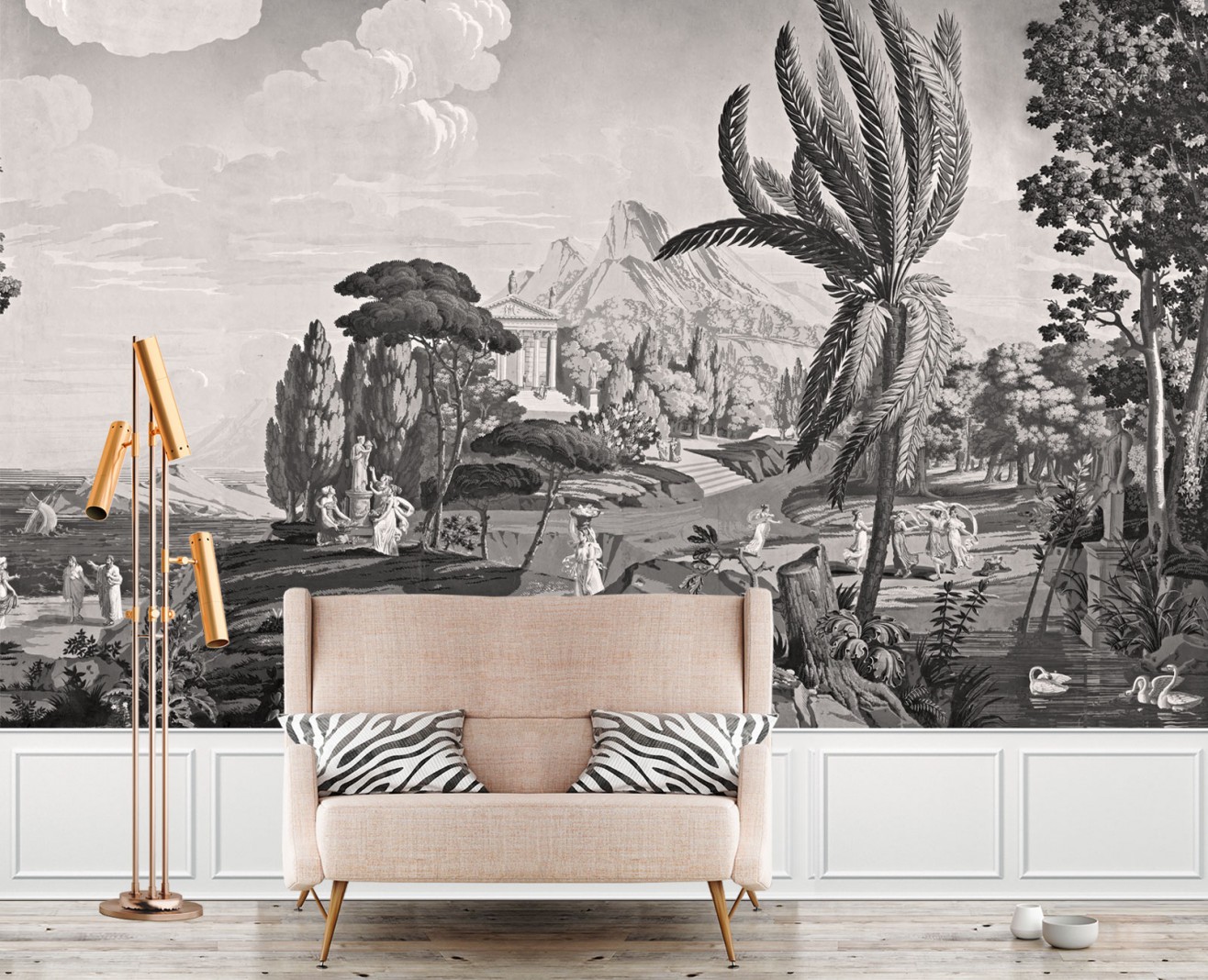 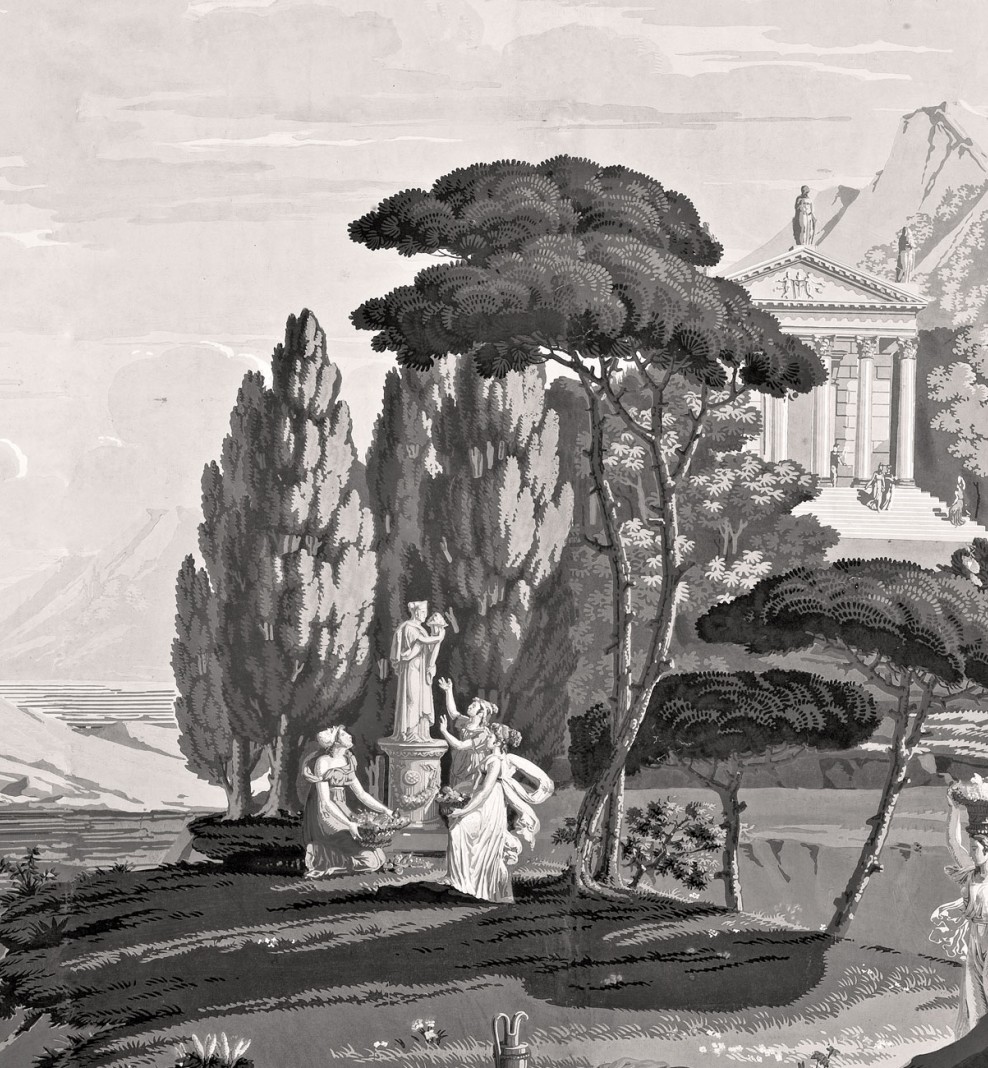 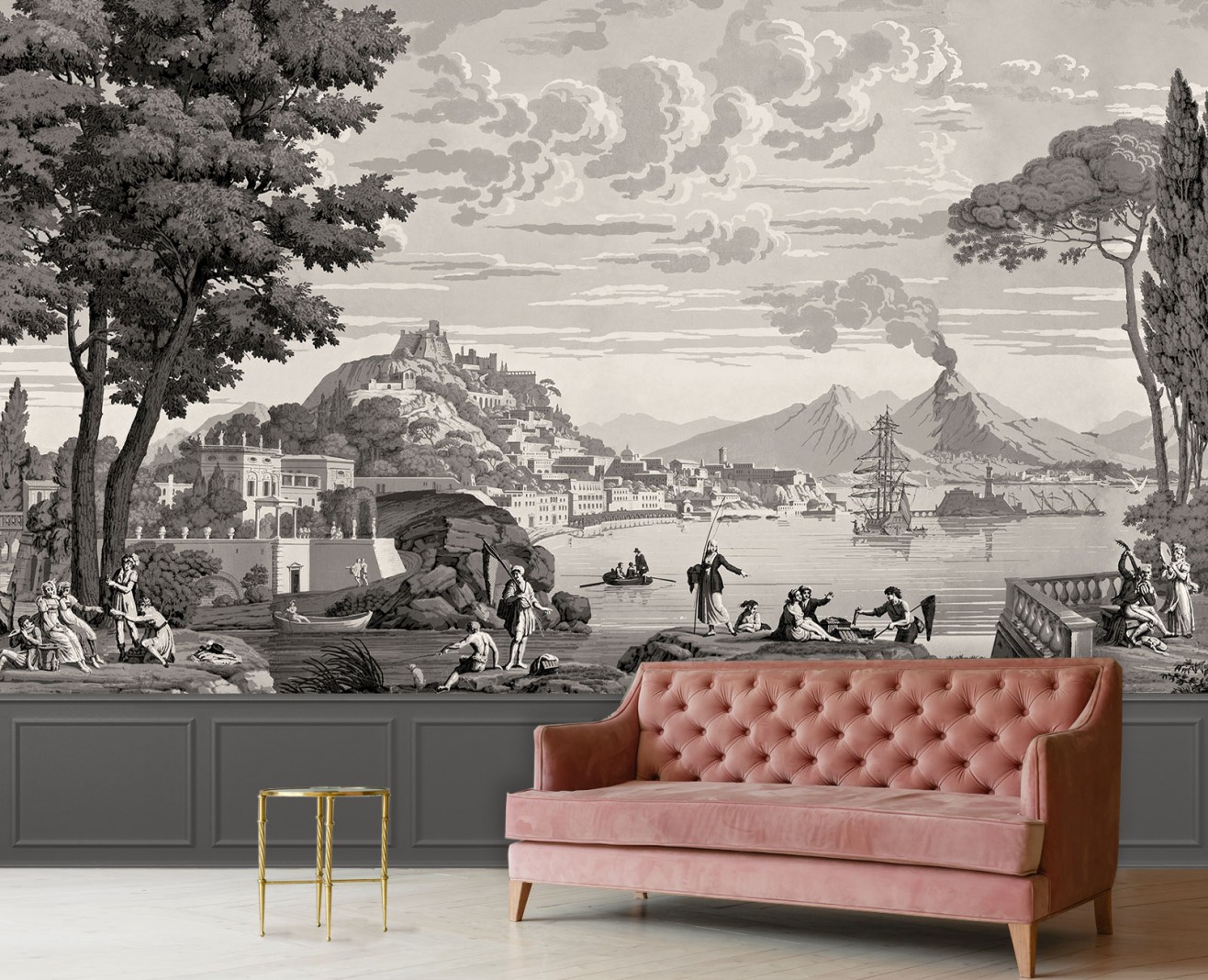 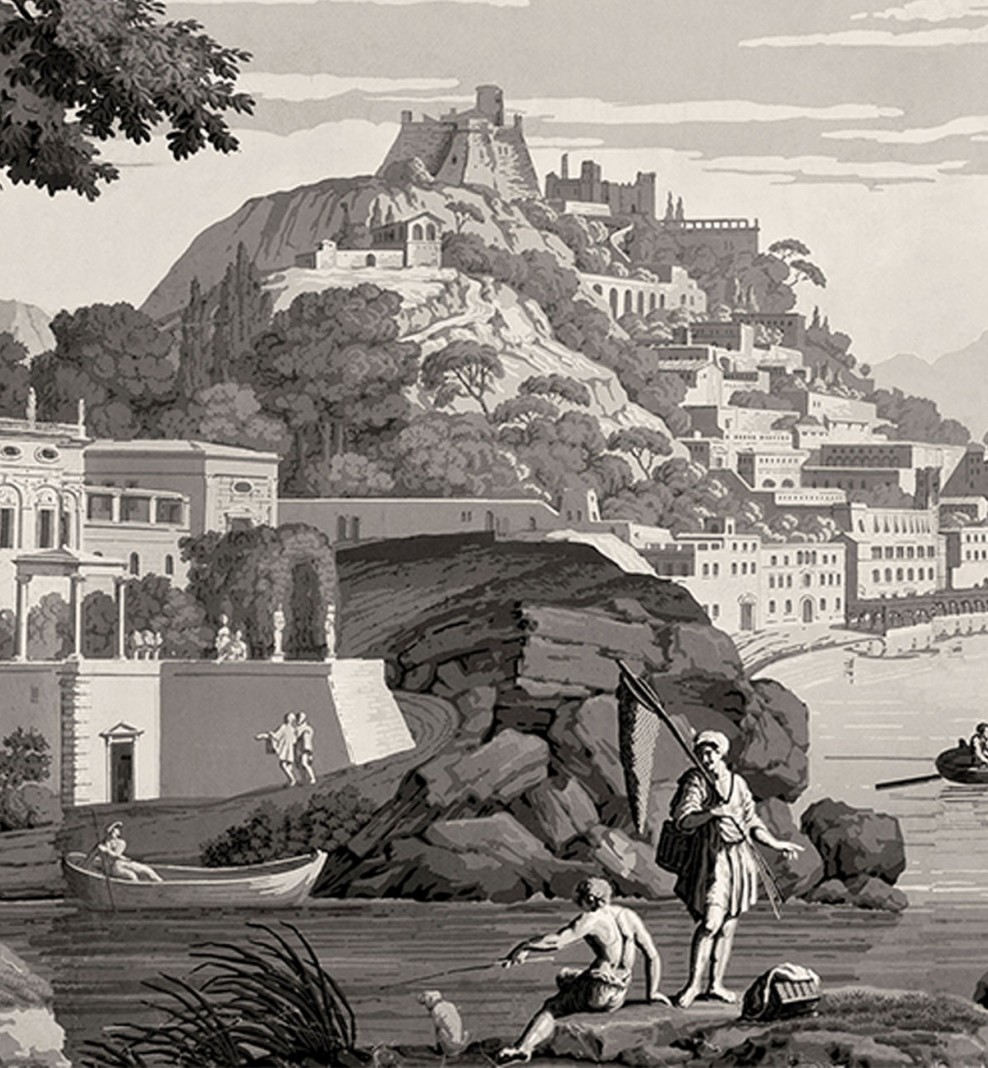