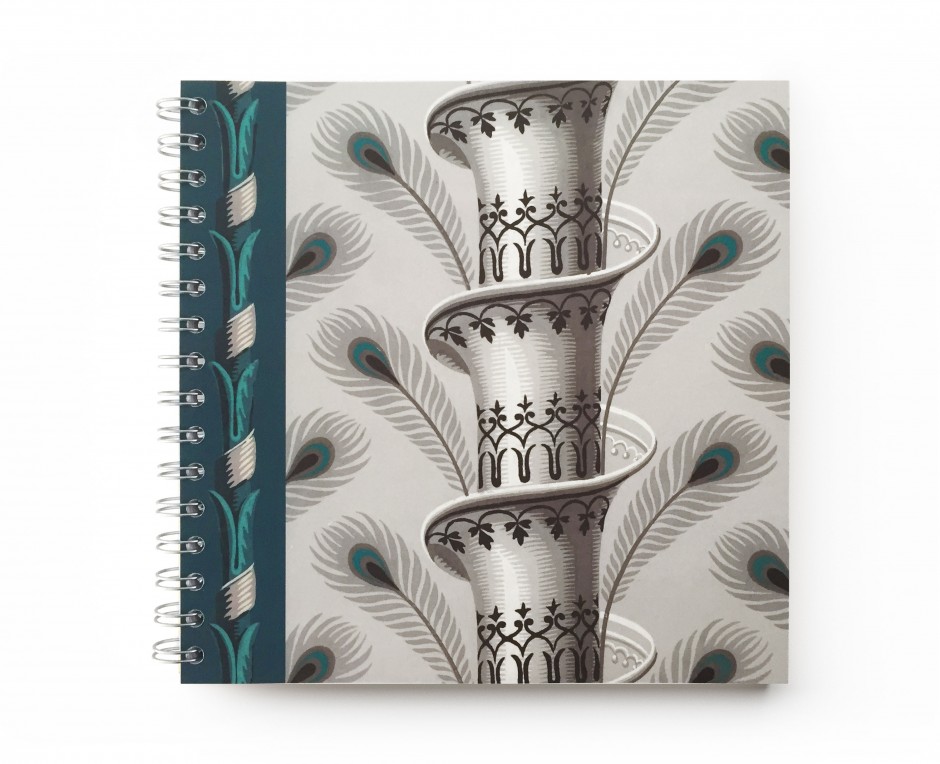 The notebook displays samples from decorative wallpapers created in 1803 by the Jacquemart & Bénard manufacturers : on the cover "Peacock feather", on the inside cover "Stylized leaves". The original pattern was printed by means of engraved wooden-blocks in 9 different colors on a top of joined sections.

Both the graphics and the imagery of this early 19th century wallpaper underline the strong influence of the French Revolution symbols. The side stems evoke the lictor’s bundles; the ribbons call to mind the blue / white /red ones systematically winded round columns; the leaves conjure up the oak tree leaves, the revolutionary symbol above all else, since referring to the so-named “Arbres de la Liberté”, trees of freedom.
During the 19th century, the freedom tree (more often an oak tree) became a strong symbol of the French Republic, by imitation of what had happened in The United States with the freedom poles after the Independence War. From 1792 onwards, thousands of freedom trees were planted at busy places, in towns and villages throughout France. Regarded as civic monuments, they supposedly conveyed freeing and joy.

This peacock blue version is quite different from the original model. Actually, the latest included 2 lilac pink stripes separating the columns of leaves. We have decided to remove them so as to give more fullness to the design. Similarly, both the black color of the background and the pink color of the acacia leaves (the small leaves between the big ones) have been reinterpreted in different shades of peacock blue, more in accordance with what is loved today.