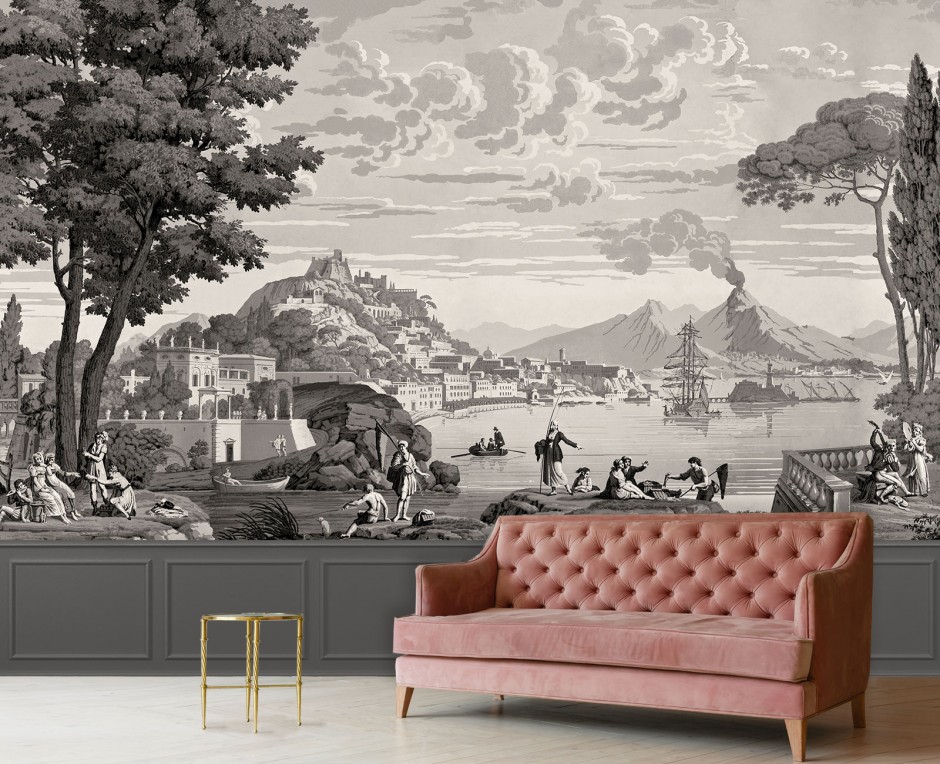 Edited in 1823, this panoramic wallpaper was made by the Manufacture Dufour & Leyor. It evokes an idealized Italy through some of its most picturesque cities : Naples, Genoa, Rome… At the beginning of the 19th century, Italy and the antic style are very fashionable. Lots of engravings showing Italy are circulating around Europe. A novel by Madame de STAËL (1766-1817), Corinne ou l’Italie , was a bestseller. And artists crave for winning the prestigious Rome Prize. Thus, the creation of the mural, "Views from Italy", met the cotemporaries’ keen interest on the subject.

The Manufacture Dufour’s designers have been inspired by Constant Bourgeois’ engravings for the landscapes, and by Joseph Vernet’s paintings for the figures.

Created by Joseph Dufour, the so-named manufacture is, along with Zuber and Cie, one of the most exceptional of the 19th century regarding the creation of wallpapers, and especially panoramic murals. Ambitious, talented, humanist, and heavily influenced by the French Revolution ideals, Joseph Dufour set up first in Mâcon, and  then in Paris.  At his beginnings, he kept in tune with the style and taste of time, reproducing drapery patterns on paper. Then, he progressively turned towards literary and exotic themes which he made the most with the creation of mural panoramics.

Exhibited in Paris in 1806, his first panoramic mural, "Les Sauvages de la Mer Pacifique", enjoyed great success, and Joseph Dufour was then considered the most revolutionary creator of the time in the art of decoration. Therefore, associated to his name, his patterns became famous all over the world, especially in Europe and in The United States.

"Views from Italy" is one of the longest panoramic wallpaper of the collections of the Musée des Arts Décoratifs de Paris. The complete artwork is about 16 meters long, made up of 33 strips. In general, the first half of the 19th century was fond of grandeur, which accounts for the immediate success of panoramic wallpapers. Similarly, Romantism had set the fashion of large paintings depicting historical, mythological or religious themes. Out of famous artists are the outstanding Delacroix, David, Gericault – whose “Radeau de la Méduse” measures about 5m X 7m - Of course, such important sizes were ordered by an official clientele, especially by museums.

Scrutinizing the shapes of the bundles stored along the quay, you can recognize a lot of merchandises : oil barrels, sacks of grains, navy ropes, cotton and hemp bales…
Foreigners standing on the port, sailors’activity, accumulation of bundles, are typical details of panoramic wallpapers. They point out the world wealth, the importance of trade, and the mysterious and fascinating character of far off lands. But, as often, no realism : life or work difficulties are smoothed out. On this mural, for example, the sailors are rather strolling and gazing round, than really working.

Panoramic wallpaper
The landscape of Telemachus on
the isle of Calypso polychrome . 1818

Panoramic wallpaper
The landscape of Telemachus on
the isle of Calypso polychrome . 1818