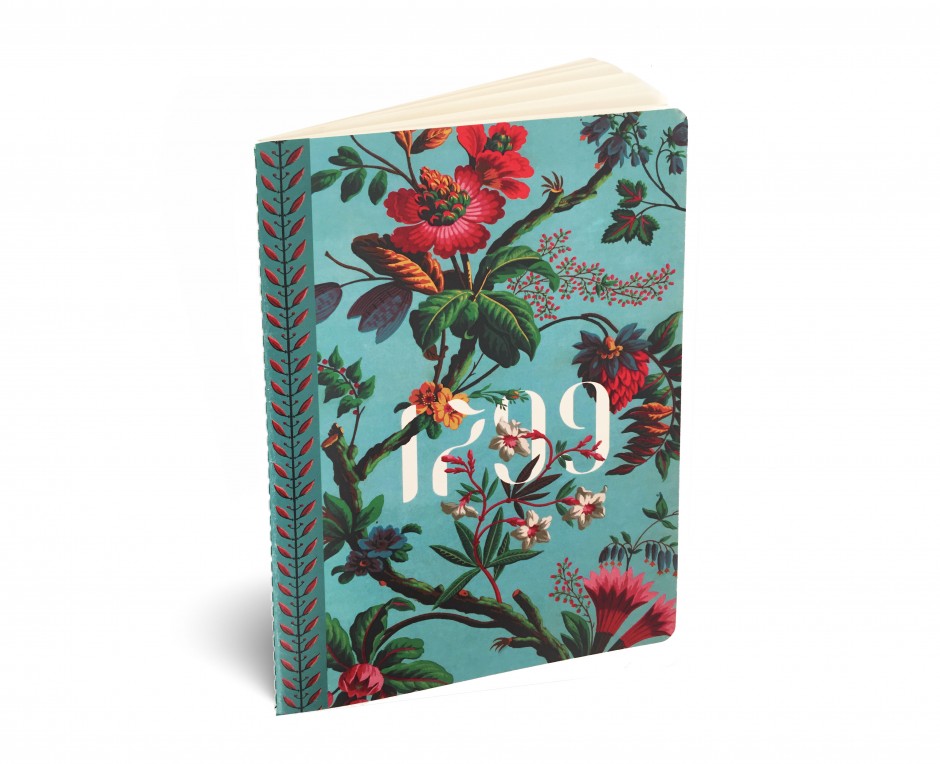 Bound in accordance with a traditional process. The sheets are sewn together by hand with a Singer machine. The emeraude green thread matches the cover pattern.

This notebook cover displays one of the scenes from the decorative wallpaper "Fancy Flowers". This decorative wallpaper was created in 1799 by the Jacquemart & Bénard manufacturers. The original model displays exotic multicolored flowers. It was originally printed in more than 20 colors by means of engraved wooden-blocks, on top of a brush-smoothed background of joined sections.

In the 18th and 19th centuries, the West countries were fascinated by the Far East countries. Spread by trade companies, the oriental imagery and decoration codes influenced the European tastes. Wallpapers from China and India, in particular, enjoyed great success. Thus, the Paris manufactures progressively took these new likings into account. Distancing themselves from the original models, they created their own patterns, giving birth to the style “Chinoiseries”. Decorators and designers, in several branches of the decorative arts, were very good at making use of this style, with symbols like pagodas, vases or exotic flowers.

On the original model (as you can see on the round photo) cows and sheep are peacefully settled at the bottom of a tree. In the 18th century, the genre painting was highly fashionable, and there was an increasing representation of rural scenes and everyday life on wallpapers and decorative arts in general. Nevertheless, we have decided to remove this charming little flock to give this artwork a more contemporary character.