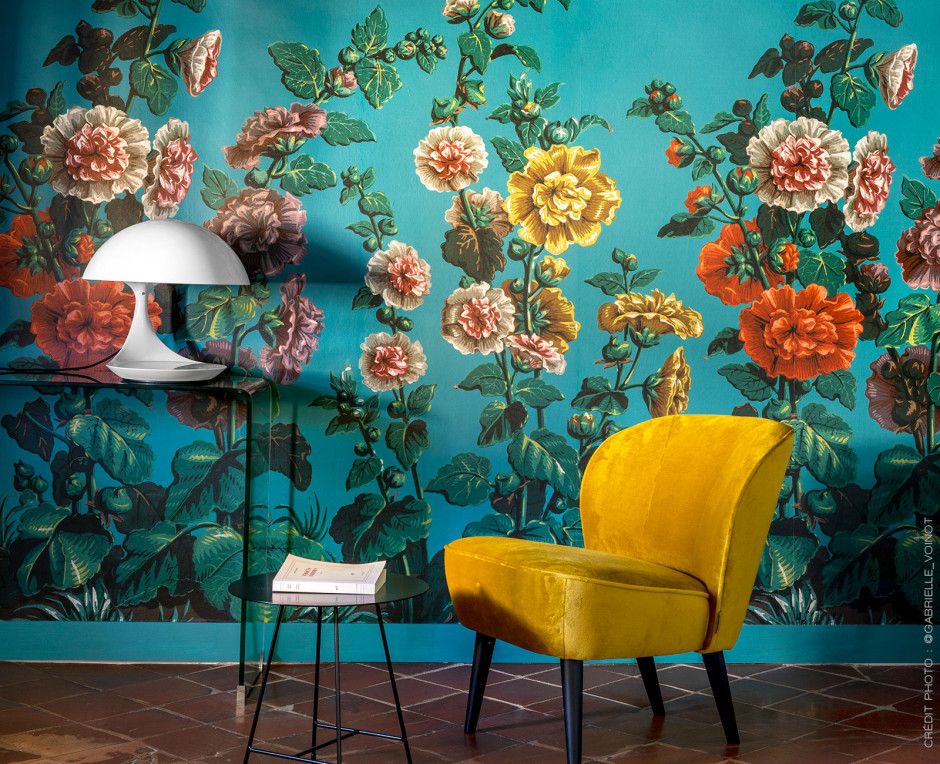 This wallpaper was produced in 1799, by Manufacturer Legrand. It displays a hollyhock bed. The original decor was printed in 22 different colors, using engraved woodblocks, on rolls of smoothed paper bound together.

Created during the Ancient Regime, the Legrand manufacture operated through the French Revolution, until the early years of the July Monarchy. Settled in Paris, it was specialized in wallpapers featuring chinoiseries, arabesques, architecture ornaments such as balustrades, antic sceneries, drapery effects, flower patterns, and the like.

The Manufacture’s production offered different sorts of wallpapers: painted with woodblocks, velvety, “tontisse” (with raised velvet patterns), brushed… These papers were made and designed for different uses: murals of course, but also overdoors, dadoes…

Between 1800 and 1845, urbanization in Paris sped up, due to the population quickly increasing from 500000 to more than a million. The inhabitants felt like recreating blooming country gardens, either in miniature, or on their interior walls. That is why hollyhocks enjoyed great success in France. They even became so popular that Vilmorin–Andrieux, a famous seed distributor, had up to 60 varieties of them listed in his catalogue. But, in 1873, a disease brought from Australia decimated them in all gardens.

The original wallpaper garnered from the collections of the Bibliothèque Nationale de France has required a long digital restoration. As can be seen on the photo, folds from the keeping, paint stains, rips, and damaged edges had to be removed. As to the background, we have chosen to substitute the original garish mint green for a duck blue, more in tune with today’s taste.

Our wallpapers are hung in 3 stages: the preparation of the wall, its pasting, and the hanging. The strips are hung edge to edge and from left to right in the order indicated on the assembly plan supplied with the rolls. To find out more, consult our Hanging instructions page.

Owing to the manufacturing process, there could be small variations in colors from one production batch to the next. If possible, avoid buying different parts of the same design several weeks apart. 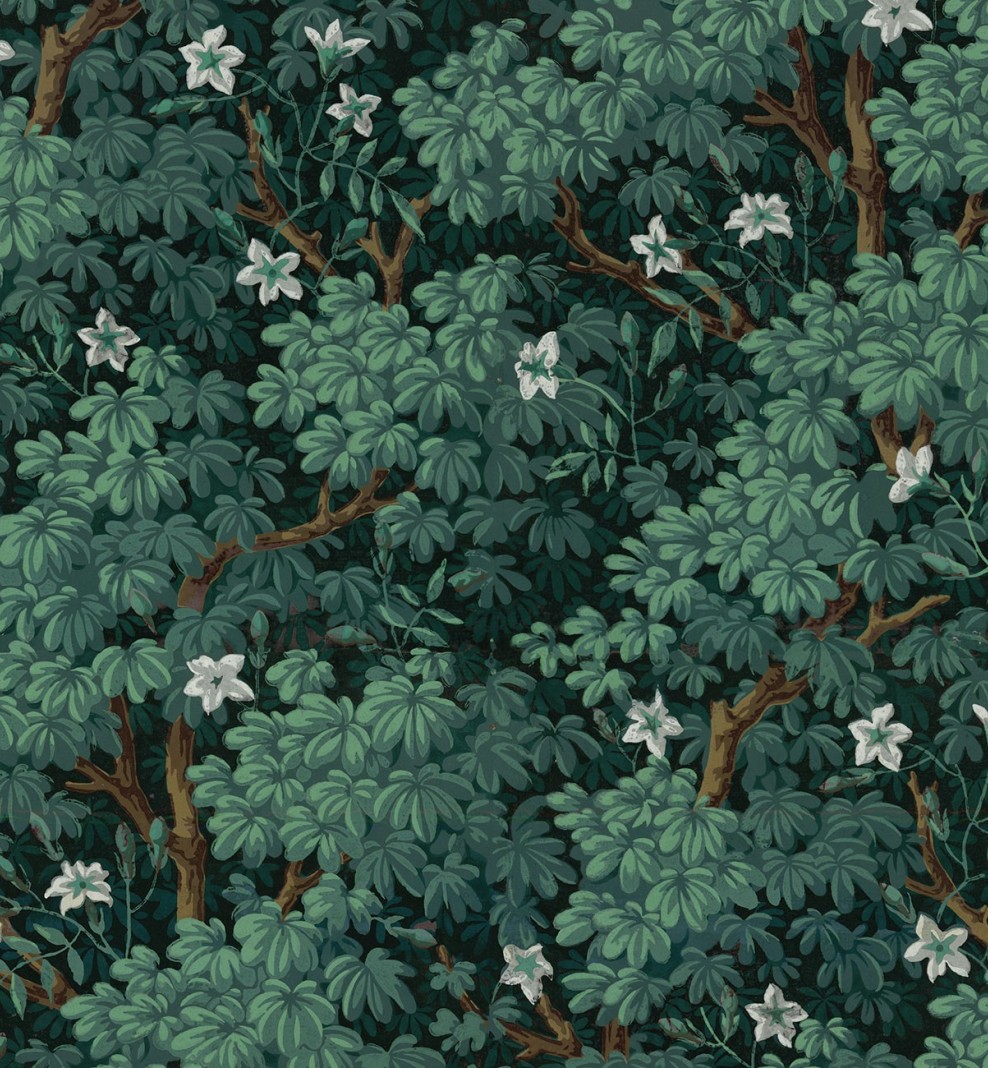 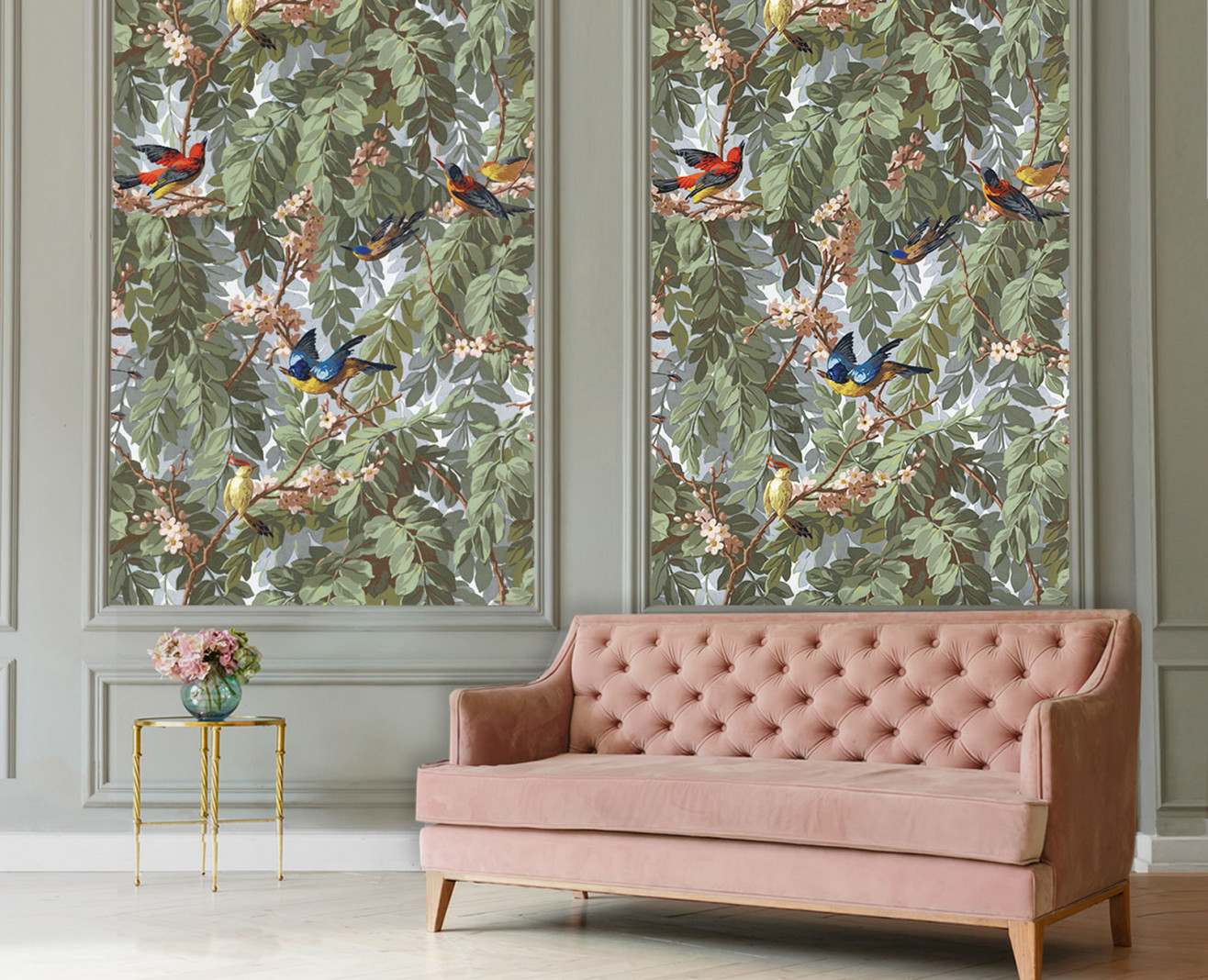 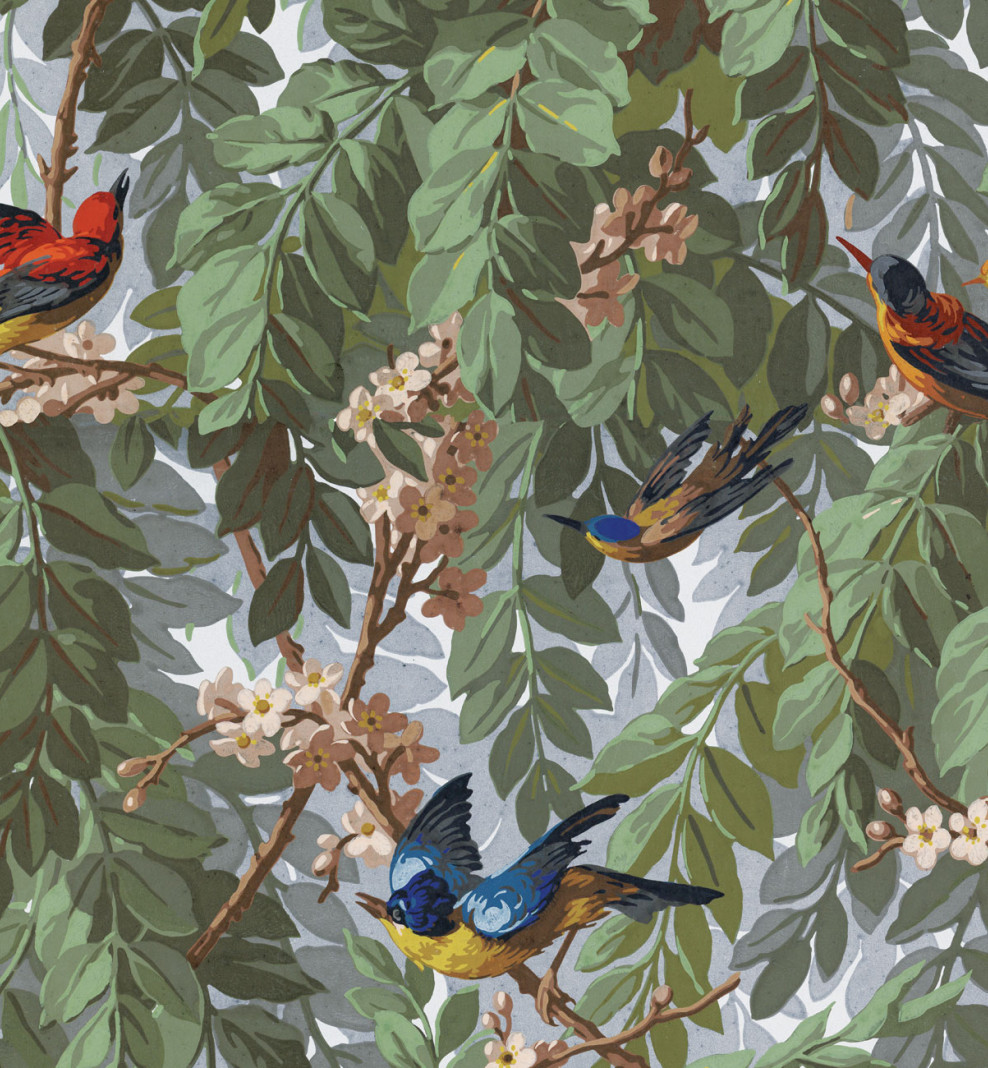 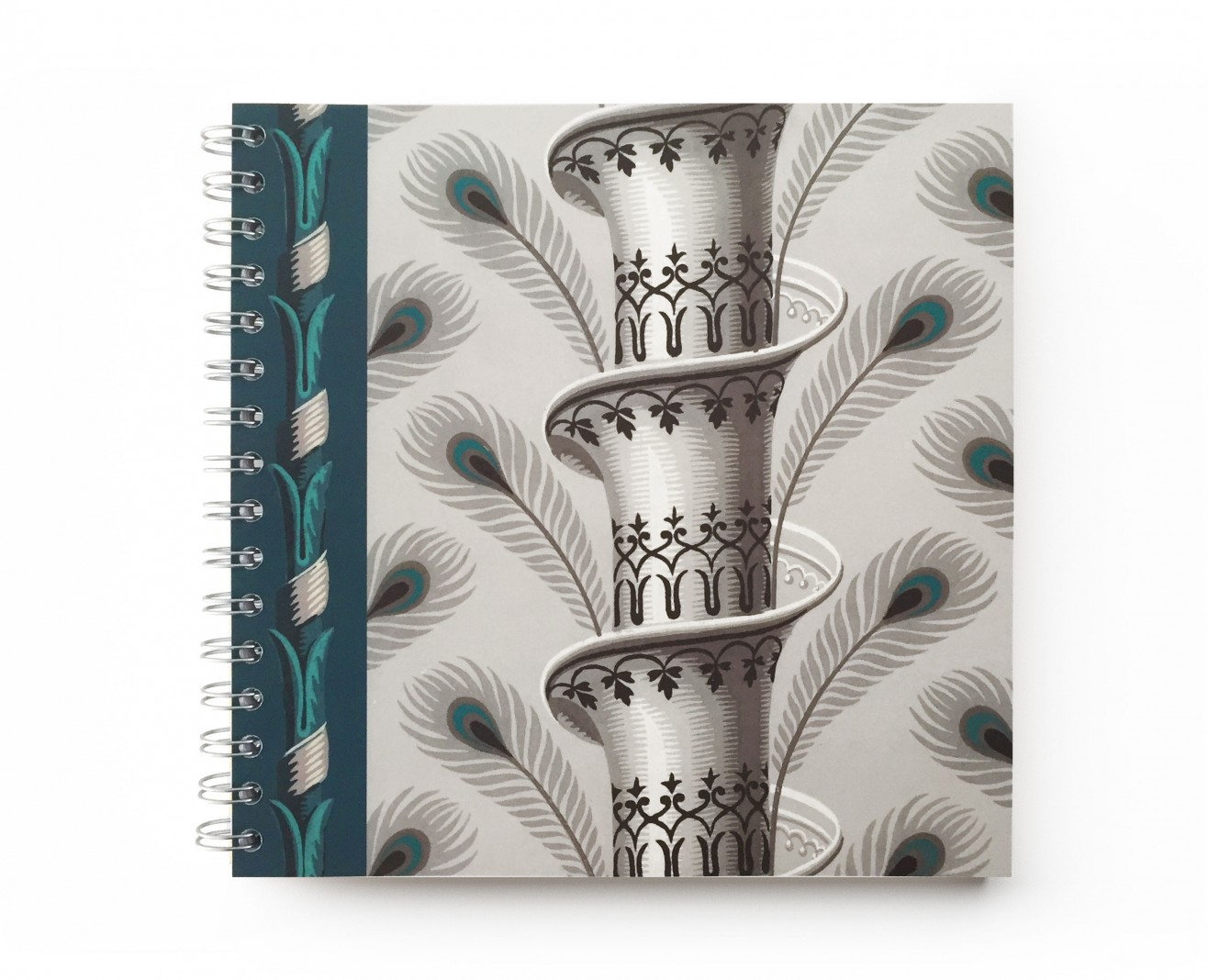 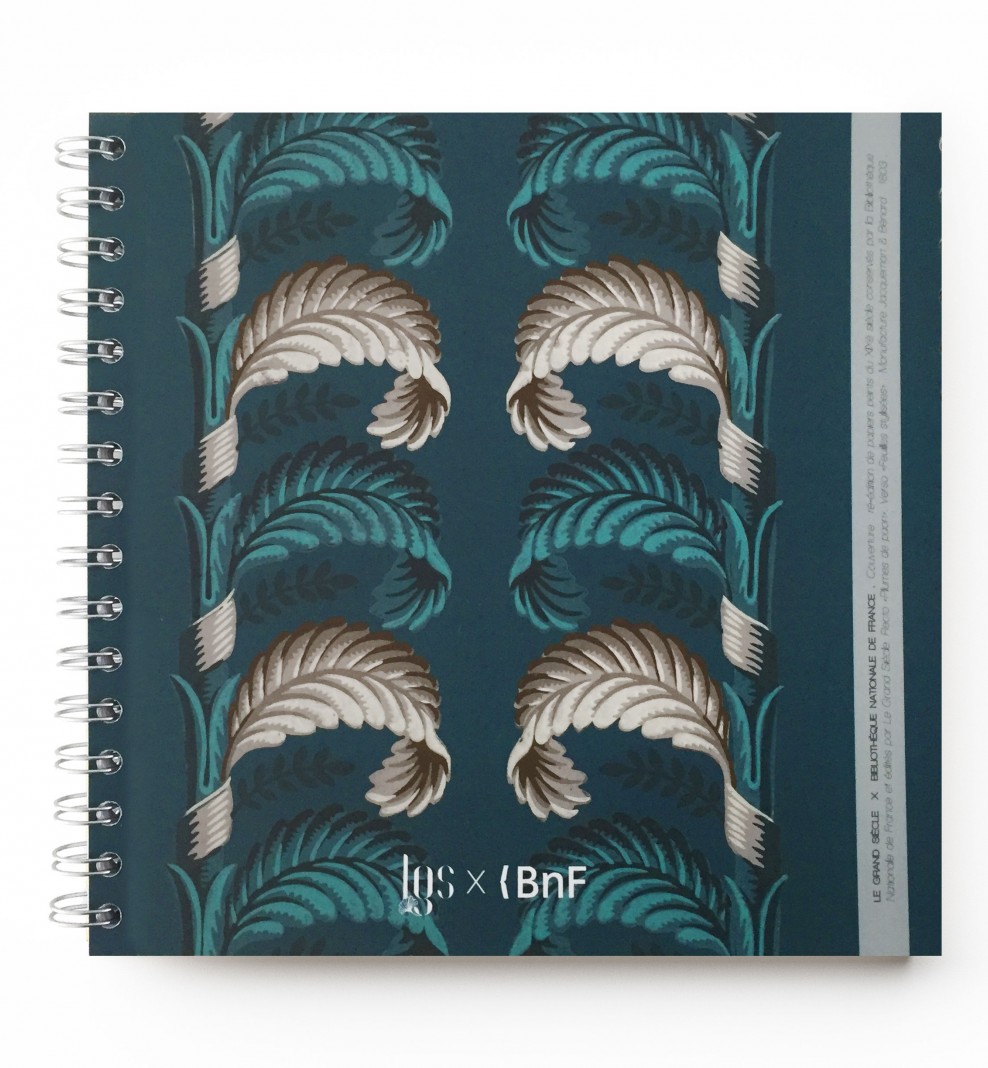